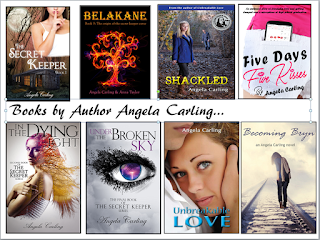 Thanks for dropping in. I’m so excited to tell you about my latest book, Five Days, Five Kisses and three best friends that you’ll want to hang out with long after you’ve finished the book. Their names are Nikola, Maya, and Liberty. Eventually each girl will have their own book, but Five Days Five Kisses is Nikola’s story and it’s all about the awkwardness of a bad breakup. If you read on, you’ll learn about my worst break up.

Do you like the cover? It was custom made by a very talented cover artist that I will definitely use again for the other two books! I love how it captures the vibe of this fun feel-good romance! 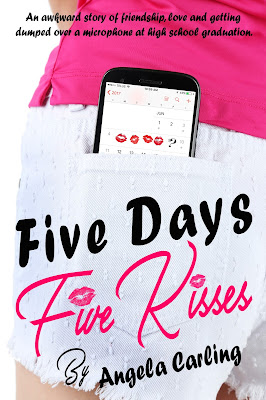 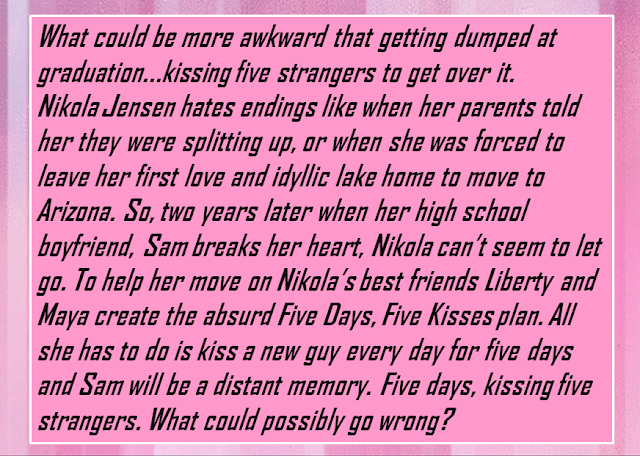 Where can you pick up your copy? Here’s the links to grab your copy for .99 only until Valentines Day then the price goes up!
Amazon
Barnes and Noble
Kobo
ITunes
If you want to keep with my new releases and books that go on sale or are FREE, join my newsletter.
Newsletter https://angelacarling.us11.list-manage.com/subscribe/post?u=39f6ad193d1ebc8c81839ff61&amp;id=4d4aec876b
Here’s me… 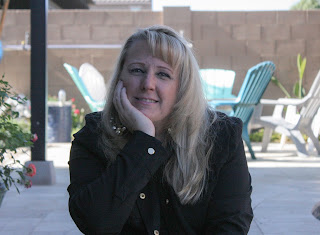 Now about my break up story….
When Nikola’s boyfriend dumped her in such public way it was easy for me to relate to her confusion and embarrassment. Fresh out of high school, I stood in her shoes, minus that microphone and the entire graduating class. My sweetheart of two years had gone on vacation  with his family. I usually went with them, but had to work. They were camping(and it was the late 80’s with no cell phones, so I didn’t worry when my boyfriend Mickey didn’t call for a couple of days), but after five days of silence, I worried that something had happened to him. The following morning I got in my car and drove three and a half hours San Diego, California. It was a gorgeous day and I found their beach campsite with no problem. Sitting on the sand, I waited for Mickey to come out of his tent. Forty five minutes, then two hours and finally three hours went by. Ah, the patience of young, stupid love. Finally, his mom came out and told me that the relationship was over! Yep, it was that brutal, dissed by your boyfriend’s mother. Hold on, it actually gets more awkward.
The next night I didn’t sleep. How could I? The love of my life had changed overnight. Surely he was having a moment of insanity and had just forgotten his undying love for me.  I was such a teenager, full of drama! So I did what any love struck teen would do who was full of optimism and longing, I drove to San Diego again and waited on the same beach. Now looking back, my boyfriend who hated conflict must’ve struggled for hours watching me, knowing he had to face me! Haha, it kind of makes me laugh. Finally, he showed up. Looking hung over and very uncomfortable he came to me and confirmed that he was breaking up with me. No warning signs, no fight. It was just over.
To me, the funny part of this story came later when I arrived home to my Dad. I was raised by a single father who had to be both mom and dad. He is a good man, but at that moment, he was very uncomfortable with his role. As he watched an endless trail of tears stream down my face, he said, “I’m sorry honey. I know you….’ He paused struggling to say the word that no father wants to think about let alone say to his daughter. Then he said, “Llloved” him sounding like the word itself might choke him to speak aloud. It was kind of wretched, but somehow made me smile through my sorrow. After a couple of months of playing the field, Mickey came to me wanting to get back together. Fool me once…and all that. So there it is, my oh-so embarassing break up story and maybe somewhere in the back of my mind, the inspiration for Nikola’s gut-wrenching day that led her straight into the arms of five strangers…or so she thought.
What’s the most awkward romantic moment that you’ve ever experienced?  Tell us about it!
And I hope you love Five Days Five Kisses!
.